Almost 27 years after MS Estonia sank during a stormy night in the Baltic Sea, which led to more than 800 lives being lost, Estonian and Swedish authorities initiated new investigations at the wreck site in 2021. 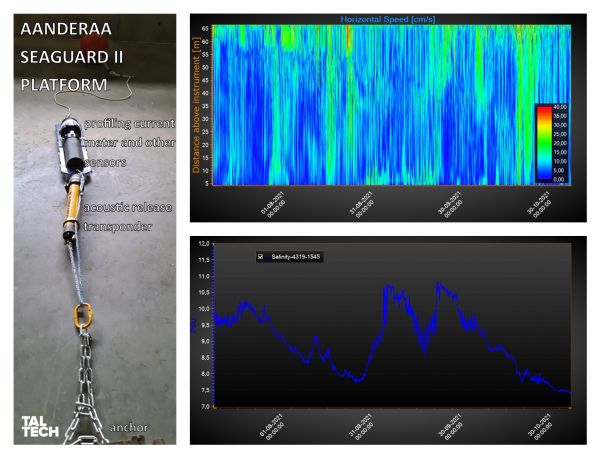 The main reason for starting new investigations was that a film team discovered new and unknown holes and cracks in the ship's hull.

An Aanderaa SeaguardII multi-parameter instrument was moored on the bottom close to the wreck to collect information about how conditions that will affect sediment transport along the bottom and corrosion of the ship hull vary at this site. Parameters measured include oxygen, salinity, temperature, water level, and water currents.

A first four-month-long deployment revealed significant variations in salinity and oxygen conditions at the wreck site and recorded maximum bottom currents of 35 cm/s during a storm on October 22, 2021.

The recorded data are needed as input and for verification of mathematical environmental models used to estimate how changes in the bottom water have affected the shipwreck and its surroundings during the past 27 years.

Read more about the re-investigation of the MS Estonia disaster

<< Back to News page